Although we always assume, or at least used to assume, that people make rational choices and show reasonable behavior in everyday life situations, the truth begs to differ. Daniel Kahneman is one of the reasons that we know about all this. He is truly one of the leaders in experimental economics and behavioral economics.

Kahneman was born in Tel Aviv in 1934. Since his parents were Jewish, he and his family faced several threats during World War II and had to constantly emigrate within Europe, especially France, to escape from the Nazis. After the war, he moved to Palestine with his mother and sister, and earned his bachelor degree in psychology and mathematics in 1954 there. Later, he pursued a PhD in Psychology from University of California at Berkeley. During his fruitful academic career, he has collaborated with many prestigious universities such as University of British Columbia, Berkeley and Princeton. At the Hebrew University, he started working with Amos Tversky, which later turned into a prolific collaboration. This partnership continued up until Tversky’s death in 1996. During this time, they published several papers and studied the process of human decision-making. In 2002, Kahneman won Nobel Prize together with Vernon Smith for “for having integrated insights from psychological research into economic science, especially concerning human judgment and decision-making under uncertainty” As a psychologist, he has done a lot of research on the decision making process in people.  Prior to Kahneman, it was believed that people are generally rational and seek to maximize their own gains. He has tried to address such concerns in his papers and documents. The results of his experiments revealed that people use shortcuts when making decisions instead of seeking to maximize utility.

To put it simply, Kahneman introduces two different components as the basis of human judgment. The first one states that humans are able to directly perceive things through getting information from the environment and surroundings. Second, we have an evaluative system which understands that our perceptions and understandings can be mistaken. The essence of his work is that, sadly, we humans and our deliberative systems of thinking, cannot and do not always do this. While many believe, probably including you who has chosen to read these lines, that such errors can be mitigated through either education or experience, but Kahneman’s findings show that people do not learn from their past mistakes and tend to repeat them over and over again. For instance, see The Conjunction Fallacy.

For all his major contributions to the economics, even though he is a psychologist, it is safe to place him between the most brilliant economic minds of the 20th and 21st centuries.

– Daniel Kahneman changed the way we think about thinking. But what do other thinkers think of him?

– A Reality Club Discussion on the Work of Daniel Kahneman

– How Kahneman Won The Nobel Prize

– Goals Are What Help You Get Satisfaction by Daniel Kahneman 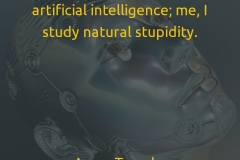