Douglass C. North was born in 1920 in Cambridge, Massachusetts. He attended college at the University of California in Berkeley and majored in political science, economics and philosophy. Upon graduation, he decided to pursue his studies in law school, but it coincided with World War II. As he later wrote in his autobiography, “because of the strong feeling that I did not want to kill anybody, I joined the Merchant Marine when I graduated from Berkeley”. The three years he spent on the sea provided him with a great opportunity to read, and these readings convinced him to become an economist.

After WWII, he continued his studies at Berkeley and received his PhD in 1952. His dissertation was about the history of life insurance in the United States. North began a career of teaching which continued for nearly seven decades. North strongly believed that to understand how markets function in a society, we should first analyze the nation’s institutions. He argued that traditional economics fails to explain how markets embed in institutions.

In the 60s, Douglass North introduced a new field in economics: Cliometrics. Cliometrics is a novel way to study economic history, through means of mathematical and quantitative methods. His first book, The Economic Growth of the United States from 1790 to 1860, reflects on this point. Before him, economic history was merely a descriptive area. However, in 1977, North came to realize that although Cliometrics can test explanations for historical change, it cannot propose new explanations for economic growth.

According to his article “Institutions, Institutional Change and Economic Performance” which he wrote in 1990, institutions are constraints devised by people and imposed on their political, economic, and social behavior; they include habits and customs as well as formal constraints such as laws. He then tried to explain the impacts of institutions on individual behavior and economic performance, making him the father of new institutionalist economics. Institutions, as North believed, affect both economic performance and the market because institutions are all about human beings – how they interact with one another and how they structure their world. These institutions affect the costs of producing goods, the ability to sell goods, and thus economic growth rates. In 1993, Douglass North was awarded Nobel Prize in economics, along with Robert Fogel, for “having renewed research in economic history by applying economic theory and quantitative methods in order to explain economic and institutional change.”

A Conversation with Douglass North

Douglass North was a visionary 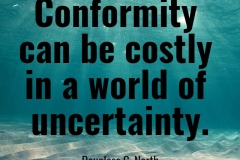 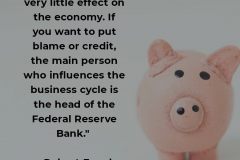