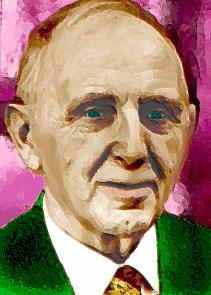 Simon Kuznets was born on April 30, 1901 in the city of Pinsk. He was the second son of the family and his father was a banker. Later, he moved with his family to Rovno in Eastern Ukraine. There they lived with his mother’s family, who were well-to-do furriers there. He spent his secondary school in Rovno.

Before the beginning of World War I, his father and older brother moved to the United States while Simon and the rest of his family stayed in Rovno. Later, because of Jewish expulsion, they were forced to leave the city; therefore, they moved to Kharkiv. In 1916, Simon started his secondary education at Kharkiv high school where he came face to face with economics for the first time. During this period, he was much influenced by Joseph Schumpeter’s theory of innovation and the business cycle.

In 1918, Kuznets entered a training course at the Kharkiv Institute of Commerce where he acquired a fundamental knowledge of economics, history, demography, statistics and natural sciences. In 1920, he joined the Department of Labor of UZHBURO (South Bureau) of the Central Council of Trade Unions. Here, he published his first scientific paper, entitled ‘Monetary wages and salaries of factory workers in Kharkiv in 1920’. Nontheless, he never finished his studies and had to leave the country in 1922 before he could earn his degrees. Subsequently, he immigrated to the USA where he enrolled at the Columbia University, and resumed his studies in economics, earning his B. Sc degree in 1923 and M.A. degree in 1924. Thereafter, he began his career as a member of research staff at the National Bureau of Economic Research, shortly becoming the head of the Bureau’s work on national income accounts.

His instructor at Columbia, Wesley Mitchell, founded the National Bureau of Economic Research, with which Kuznets was affiliated for more than 30 years, beginning in 1927. This was also where he met his future wife, Edith; they married in 1927 and had two children. In 1971, Simon Kuznets received the Sveriges Riksbank Prize in Economic Sciences in Memory of Alfred Nobel “for his empirically founded interpretation of economic growth which has led to new and deepened insight into the economic and social structure and process of development.”

As cited in Ganga Library Inc: “Simon Kuznets left his Nobel Prize in his safety deposit box until his death, when it was bequeathed to his son. His son, Paul Kuznets, left it in his safety deposit box until 2015, when Paul decided to partner with Nate Sanders’ Auctions in Los Angeles to auction it off. The prize sold for $390,848 to a Korean Fashion and Retail Group, E-Land. It has been reported that E-Land plans to display the medal in a museum that is part of a “multi-city theme park.”

Prior to his work, GDP was determined mostly by rough guesses with neither the government agencies nor the private researchers collecting the data so meticulously. He developed methods for calculating the size of a nation’s income and changes in it. Simon Kuznets also analyzed swings in the economy’s growth rate over long periods and how these were connected with population growth.

Towards the end of his career, he set up his home in Cambridge, Massachusetts and died there on July 8, 1985. He was then 84 years old.

– Simon Kuznets’ speech at the Nobel Banquet in 1971

– Putting a Price on Simon Kuznet’s Nobel in Economics